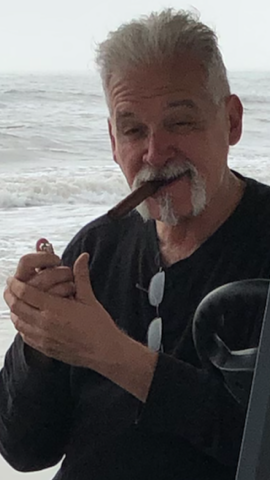 A dear friend of mine, Regan Taylor, passed in 2020. We had many adventures together. Here’s my recollection of a trip we took out to Tangier Island in 2006:

Regan and I went on a road trip once, a ferry trip out to a weird little place called Tangier Island, in the middle of Chesapeake Bay. The natives are a very tight-knit community descended from Cornish crab and fishermen and still speak the dialect to each other. So, you’re surrounded by locals who have a secret language.
Over time, the population of islanders has gone through many generations (from the 1600s on). When they began to run out of space for graves, the custom was to bury their dead near the homes. So, as time passed into the 1900s and world wars, families lost multiple members to the fighting. Some were decorated heroes and had elaborate shrines erected in their memory. So, you’re also surrounded by graves.
The oldest homes are Victorian, with a few two-story plus mansions. One of these is Hilda’s Crockett’s Chesapeake House, a bed and breakfast where you get breakfast and can choose either dinner the night you arrive or lunch the next day. We had the feeling the food was always the same: sweet, succulent crab cakes, Maryland style. One of the richest foods I’ve ever put in my mouth; I don’t think too many people would want two meals in a row of that.
At night, the Atlantic fog rolls in. And Regan and I go for a walk at about 9 pm. It’s like stepping into a Stephen King psycho-killer-out-of-the-fog novel. We see the thick fog illuminated in globes of orange streetlights shining down on these creepy old homes with graves in the front yards. Chain link fences on both sides of the street. As we walk, we see a moving shadow which becomes a man walking the opposite way. As we pass by, we nod and say hello.
He stops and says, “Hey!”
Regan and I look at each other. Have we found Stephen King’s murderous protagonist?
The man says, “Did you guys bring any beer?”
I think it’s a “dry” island.